Yo! Boss says fear is key to success

I found this article in the B2B showguide:

Not that Simon is afraid of much. Charming, confident, polite, sensitive to the feelings of others, the founder of the YO! brand of companies is a happy proponent of the power of fear. While most of us go to any lengths to avoid anything painful or frightening, successful people, by contrast, embrace fear to create their own destiny. If you want to be a success, you’d be advised to set up a business that’s outside your comfort zone and stay there for a while. Simon says: “It’s like dropping a pebble in water. Your comfort zone gets bigger.”

And he should know. This is the man who packed in a comfortable job in television – the only time he felt compelled to wear a suit and have his hair slicked back – to borrow money to establish a business in a s sector he knew nothing about. If YO! Sushi had failed, Simon Woodroffe would have been left with less than nothing. A fearful prospect for most. But the driver for many successful business people.

“I had never thought about restaurants much,” he recounts as he explains the origins of YO! Sushi, “But I was sitting in a restaurant in Hanover Square thinking about what I was going to do with my life when my Japanese lunch companion said I should start a conveyor belt sushi bar with girls in PVC mini-skirts. There are 2,500 in Japan – without the mini-skirts – so I went out twice to research it and I just knew it would work.”

Despite the inherently high-risk nature of the restaurant trade, instincts told Simon that his spin on the idea, making it a culinary entertainment experience rather than a fish refuelling stop, would succeed. Stepping outside his comfort zone, he started on the path that every entrepreneur entering an unknown sector has experienced: rejection upon rejection. He was sent packing by his own bank manager and, in his search for an ideal location to proffer sustenance by conveyor belt, was hastily shown the door by prospective landlords. But one doesn’t give up when blessed with enthusiasm and a great idea. “Enthusiasm is the key,” says Simon. “When you’ve got someone who is really passionate and who really believes in themselves, it’s very easy to convince people. If you’re going to be a salesman, find a really good product and then it’s very easy to sell.”

If embracing fear and running on passion are central tenets of the Woodroffe approach to business, what else does he recommend as a path to success? Some of it is standard management textbook stuff, but no less valid for coming out of the mouth of someone so passionate about fighting against the constraints of process-driven corporate structures. Employ disparate people to run a disparate business (that would be diversity in textbooks). And don’t get involved in details if you’re not a detail person. Indeed before going into one of his restaurants, Simon used to walk around the block doing deep breathing exercises to overcome his urge to interfere. His irrational belief was that unless everything was perfect, no customer would ever dine there again and the official receiver would be the only one salivating at the door.

Our pieces of his wisdom are truly original. “We say we just want to have some fun and meet more girls. When you have that attitude, magical things happen. There’s an inner self-esteem, and inner self-confidence.”

With his affinity for people and a natural desire to get the best out of others – Simon is quick to credit those working with him both now and in the past – from current YO! CEO Jim Woods back from Phillip Brown, the assistant bank manager who extended the loan that launched YO!.

His policy has always been to hire or partner with people who are either underqualified or a little on the young side for the positions they hold. Now, after selling a large chunk of YO! Sushi to its management, an embryonic enterprise called YO! How is in development. Using online video, books, seminars and workshops, YO! How will take participants out of their comfort zone and spread the YO! way of thinking. The hope is that intense business training can help people change lives. The trouble with established self-developments, as Simon sees it, is twofold. Firstly many are “very American”, which isn’t a handicap Simon suffers. Secondly, because they only last a day or two, after an initial, very brief period of enthusiasm, delegates quickly fall back into the everyday habits of working life.

YO! How will take a hundred days to complete, with the web being employed for most interaction. This level of immersion will lead to rounded people who have fun in their business lives. In the States, some development programmes involve participants shadowing CEOs: travelling on the same flights and sometimes moving into their homes. “It’s very intense personal coaching and we’re looking at implanting a version of that for a large number of people,” Simon explains.

Another substantial project, of interest to anyone who ever had the misfortune to overpay for accommodation is central London and at airports, is YOTEL!, offering small but luxurious rooms at a fraction of the price one would normally pay. The first YOTEL! is due to open next year and likely locations will be major UK airports, with the search on for sites in central London. Prototype rooms have already been built and kitted out. One, the premium room – it boasts a shower area that its standard brethren lacks – dominates YP! Marylebone HQ, which itself would be described by estate agents as compact and bijou. 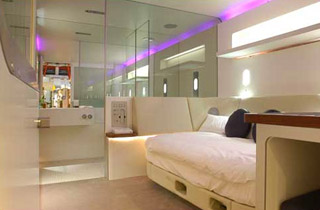 Perched on the end of the bed, guests will be able to work at a foldaway desk, or can lie back and enjoy downloadable movies on a flat-screen TV, while keeping an eye on what’s going on in the hotel corridor (many rooms are inward-facing). Wireless connectivity is standard as is service excellence. It’s luxury liner meets The Fifth Element in a 10 m2 room. And all for Â£70 a night for the en-suite room – thirty pounds cheaper if you’re willing to run down the corridor to the showers.

Simon says: “I always to marry real luxury with a very good price. Normally you get one or the other. In order to do that you have to do something different.” In this case, rooms face onto corridors, your privacy perfectly protected by a blind. The pods, as they are known, will be crammed into the available space, generating the revenue that allows prices to be kept low and quality high. In truth, the premium room certainly doesn’t feel that small. The large, comfortable bed dominates, certainly, but anyone who has stayed in a budget chain hotel won’t notice much loss of space. The undoubted quality and funkiness makes up for the compactness. As does the price-busting nightly fee. Who wants to pay Â£150 for a West End hotel when you’re asleep for most of your time there?

With all these projects on the go, plus a growing television career, Simon is a very busy man indeed. Busyness keeps him happy. “I’ve never met someone who went to work for themselves who said they wished they hadn’t done so, regardless of whether they succeeded or failed, or indeed whether they eventually went back to work for somebody.”

One doesn’t get the impress that Simon is going back to work for someone else, in a suit with his hair slicked back. No fear. He has too many good ideas and enthusiasm that is infectious.

YO! founder Simon Woodroffe delights in “shooting his mouth off”. (His words! You don’t get too many corporate chairmen admitting to being mouthy). Simon says what he thinks and he conveys his thoughts articulately and enthusiastically. So unsurprisingly, after telling his own story in his own words in countless speeches, he’s in demand on the conference circuit and increasingly, on TV and radio.

Simon’s broadcasting career is really taking off after the success of BBC2’s Dragons’ Den, a beauty parade of aspiring entrepreneurs sent to fight for cash from five feisty investors. Simon is one of the dragons, as they are known, eager to invest profitably, but also to offer wise counsel and support to those setting off on a difficult path. Viewers might not notice his care and concern when watching the compelling programme. Some interactions border on the cruel, evidenced by contestants shuffling away from their dragon experience caked in sweat or on the verge of tears. Others are defiant, some angry.

“It’s true,” concedes Simon. “But when it’s your own money and it’s their lives, you have to be direct. Take the sword out and cut cleanly, I say. But I’d like to see a bit more encouragement coming out. In fact, the fastest we ever got anyone through was 20 minutes and often it was an hour and a half, so there was a lot left on the cutting room floor. And I was the one saying to everybody, you were the ones in that room a while back, come on. But the drama made good TV.”

Simon has also worked on four half hour programmes for the BBC called Mind Your Own Business which were broadcast last year, a future series is in the pipeline. He is currently developing a number of TV concepts based around entrepreneurship and business as the new rock and roll. There is also a series of radio/podcast interviews with other business celebrities on the table.

He is in no doubt about the benefit to his business. “To be well-known to the public, you have to be on television regularly, not just on one-offs. And it means that when we do a new YO! project, the public and not just the industry will be interested.”

This article was written by Paul Nero for the B2B South East Showguide.