What’s Travian All About?

My favourite little time-stealer, Travian is a browser-based strategy game cleverly programmed in PHP so that you don’t need to download anything to play. Started in Germany, Travian is quite easily the most played browser game right now and has grown to over 3 million players worldwide.

Events occur and resources accumulate in real time. The player starts with a small, mostly empty village and some renewable resources with the intention of building an empire. As the leader of a village, either Roman, Teuton or Gaul, your village will have its own unique types of buildings, resources, armies, strengths and weaknesses. The Gauls are largely defensive, the Teutons more aggressive and the Romans have a balance of the two styes.

Many players attack villages to gain resources (lumber, clay, iron and food) and increase their armies and empire, and most players eventually join an alliance as a defensive strategy or to destroy villages en mass.

Here’s a snapshot of my peaceful Gaul village from a while back: 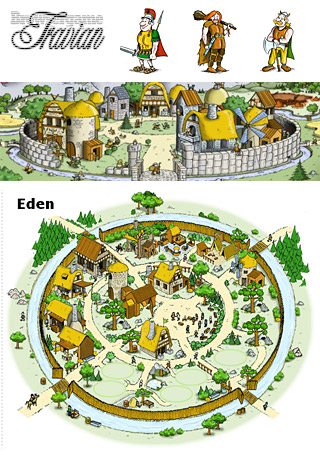 I really hope some of you join from my referral links as I will get gold bounty after your village has grown to a population of 75, thus allowing me to do extra fun things! Let me know if you do. I’m user yummywakame, Gaul and in the SE quadrant on US3.