Meet Brett – who could best be described as my ‘super psyched’ companion for the week or so long Texas adventure I mentioned a while back. As you can see he’s a mechanical midwife of sorts, an engine gigolo, which has come in very handy with the guaranteed, yet somehow ‘completely unexpected’ mechanical failures on extended roadtrips. Women expect them. Men don’t. At least at first. That’s all I’m saying. So here he is during the birthing process. 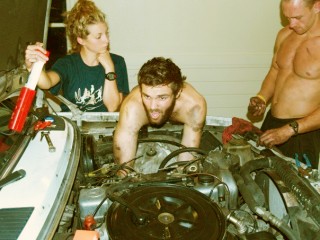 Our original plan of leaving on a dirtbike hiking/camping trip around the deserts of Texas had to be modified, because his bike broke down shortly after his own roadtrip began. He’s fixing it but its going to take some time. So instead he’s taken a few days out to purchase a special truck in Colorado which he’s awesomely converting to run off veggie oil, and he finally arrives in Marathon TX tonight! Late tonight on the longest night of the year, with 5 more hours of driving to go.

The plans are extremely loose at this stage, as we sort of want to just discover things as we go in a giant circle for a week hitting certain main points that I’ve been absolutely DYING to stay in for a long long time. I’m not even sure if we’re leaving tomorrow but it’ll happen soon enough, at least in time to completely ignore that Christmas is happening at all, and the plan is to capture it all with my new camera.

Happy Midwintering Solstice everyone!!! I’m about to cook up a batch of my famous gluhwein as a nightcap for my weary travelling friend. His favourite.