I came across this today on The Work of Byron Katie’s facebook page. She often posts ideas that get me reevaluating everything: 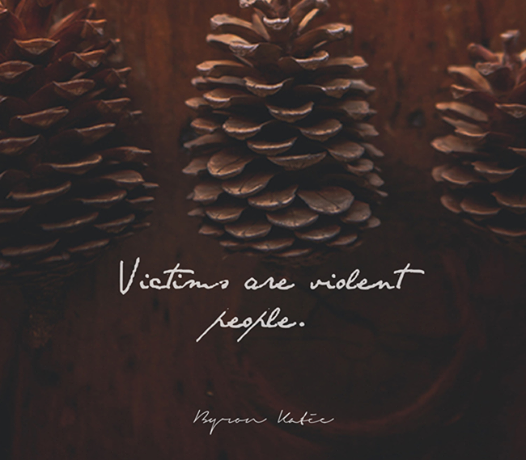 I noticed my friend Kolby had responded:

When someone approaches you and immediately claims to be a victim, a victim of something you just did, it is often an attempt at some level to manipulate and control you, to guilt or shame you into obeying their orders now.

Forcing a sense of obligation onto someone … is violent, domination, pushy.

Even if it’s unconsciously done, a habit, a lifestyle, a deliberate tactic, helpless desperation, or a practice that gets results really well over time.

If someone makes a career of being a weak, helpless victim every chance they get, primarily to harvest and live off the sympathy of others, or as a source of influence and power over others … this pushes people around, and that’s violent.

Calmly requesting help as a responsible adult, without exerting pressure … is peaceful and collaborative.

To take responsibility and take charge, stop engaging in childish blame games and simply work with whatever you have, doing the best you can. When taking charge of ones own actions, one would never pose as a “victim”, no matter what happens.

The whole “victim” label and story becomes irrelevant and useless when someone is eagerly surviving and creating regardless of the weather.

I like everything you have said. And, there is nothing wrong with having been a victim of something; some kind of trauma where one is targeted. Victim, has been coined by certain terms when we talk about unwanted behaviors. However, the very root of this word, makes it a term not to be played with. I think Katie should have added to this one.

Good points Colby and Jenny – you mirror my thoughts exactly. I have often thought Katie could have added more to avoid misinterpretation, but I decided to sit with this one and see if there is truth in it.

I once considered myself a victim of rape when I was very young. It took years to get to this point but I don’t see myself as a victim anymore. It’s a terrible thing that happened to me, but it’s over. Every day I chose to see myself as a victim was an act of violence towards myself. It was as if it’s happening over and over again, because by allowing it define me, I am holding onto it and reliving it every day.

That victim energy encircles a person and draws more, similar offenders towards them, because it’s such a good match. “Here is this lesson I am learning and I can’t let it go. Can someone agree with me please and show me its real? I need to keep believing I’m a victim”, and the offender comes in, “I noticed you right away because we have a matching lesson we’re learning. I am willing to play the role of the horrible person who will teach you the lesson you are asking for, and prove you aren’t imagining that you’re a victim, so that I can have proof of the terrible things I believe about myself too.” I dont know if I’m explaining it very well, but on another level, a soul level, I think we might agree to play certain roles that will manifest the world we want to believe in for each other. Ever since I let go of the idea that I was a victim of sexual violence (a few times over), nobody like that has come anywhere near me since then. I am learning other lessons now…

What has been your experience on the journey of victim or perpetrator, and where are you at now?